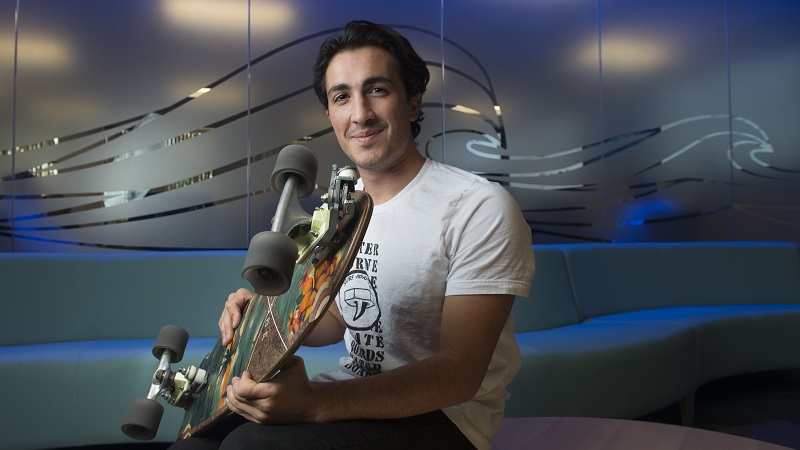 “Getting a formal education in business was instrumental for me,” says Patrick Dumas, Merage School undergraduate and founder of the startup Waterborne Skateboards. “It keeps you from spinning your wheels on things that aren’t important.” • Steve Zylius/UCI

This is the kind of praise rolling in from skateboarders across the country who love Merage School undergraduate Patrick Dumas’ invention.

By easily installing simple aluminum parts sold by Dumas’ startup Waterborne Skateboards, skateboarders can modify their board to carve turns, flow and cruise more like a surfboard. “It’s all about chasing that feeling of surfing while you’re on a skateboard,” says Dumas.

Demand for the product line — which includes not only the adapter, but three skateboard models — is growing so fast that Dumas recently opened a warehouse in California, a move that followed a successful Kickstarter campaign last year in which Dumas raised more than $42,000 for his Surf Adaptor. Dumas was also named Maschoff Brennan’s Student Innovator of the Year Award this fall — taking home a $2,500 scholarship from an Orange County law firm.

Juggling his fast-growing business with his studies has been a challenge, says Dumas, who is earning his bachelor’s in business information management, a cross-disciplinary program between the Paul Merage School of Business and the Donald Bren School of Information and Computer Science.

“It’s like having two full time jobs — one running a business and one as a full-time student. It’s hard balancing everything,” Dumas says.

When he was in high school, Dumas learned to ride waves in Huntington Beach — Surf City USA. Not until he came to UCI and wanted an easier way to get around campus did he take up skateboarding.

At first, Dumas channeled his entrepreneurial instincts into a social media-type app that he had developed before enrolling at UCI and aimed to turn into a business. Although that venture fell apart in the marketing phase, he says the process got him in touch with his business side, and UCI’s entrepreneurial resources.

On a whim one day — and at the urging of a friend who bet he couldn’t do it — Dumas set out to design and build a skateboard adapter for less than $20. At the time, the only way to get that surfboard-like feel on a skateboard was to buy a whole new board.

“Most are over-engineered and cost as much as a new surfboard, in which case most surfers would rather buy the surfboard,” Dumas explained.

Using scrap metal and a few screws, he built his first Surf Adapter. When he and his friends tried it out and loved it, he quickly realized there was a market for the new product.

“Because the goal was to build these as cheap as possible, they are way simpler than everything else on the market,” he explains. “The whole thing is just three parts. And it rides smoother.”

Dumas decided to take advantage of the joint degree offered between the Bren School and the Merage School, to leverage the skills he already had in computer science and also gain a deeper understanding of business fundamentals like advertising and accounting that would help him navigate the challenges of starting a business.

“Getting a formal education in business was instrumental for me,” he says. “It keeps you from spinning your wheels on things that aren’t important.”

The startup really picked up pace when a professor pointed Dumas to The Cove @ UCI Applied Innovation, where Dumas connected with the Wayfinder Incubator and secured investments from The Cove Fund. More importantly, he gained mentors to advise him. “The biggest resource from the Cove is the people — entrepreneurs and investors,” says Dumas. “These are people who have spent time in industry and who know how it works.”

When Dumas launched his Kickstarter campaign, it was a mentor at The Cove who pushed him to aim for bigger dollars, telling him that if he was going to raise money, he needed to think on an actual business scale.

The $42,000 he raised on Kickstarter enabled Dumas to buy parts, build a tool for manufacturing the adapter, and prototype a new design out of cast aluminum — which could better handle the wear and tear skateboarders would deliver. For months, Dumas designed and redesigned the Surf Adapter, going through more than 15 iterations. He also experimented with manufacturing the parts in China before settling on manufacturing in the U.S.

The product has taken off and the 2018 holiday shopping season led to orders pouring in.

“The response has been incredible,” Dumas says. Thanks to that success, Dumas won’t have to worry about job hunting when he graduates. For that, he’s certainly grateful, adding,  “I wouldn’t be where I am right now without the people I met at UCI.”