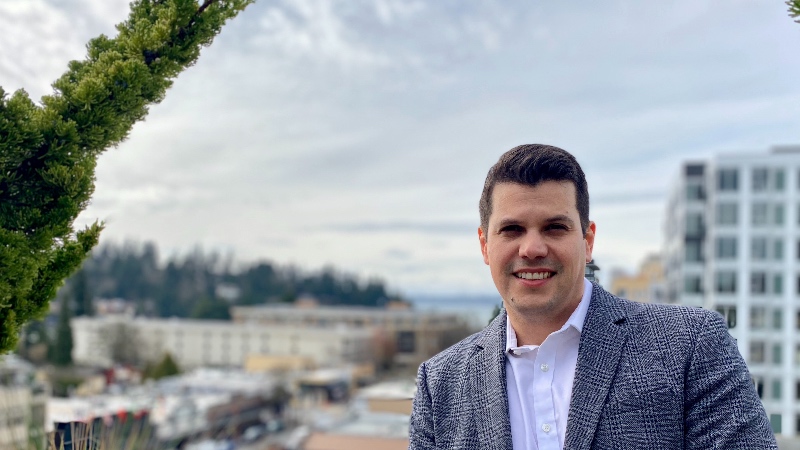 In his office on Microsoft’s Redmond, Washington, campus, Arturo San Vicente MBA ’18, feels a world away from the agricultural community where he grew up in Navojoa, Mexico.

“I felt like most innovations were coming out of the U.S. and everyone else was just following,” he says. “I wanted to be at the forefront and be part of the innovation.”

San Vicente is at the leading edge now. As a business development manager for Microsoft, he manages 120 sellers in 50 countries focused on helping K-12 teachers and students use the company’s suite of software.

“Arturo encompasses international leadership at the Merage School and now at Microsoft,” says William Hernandez, faculty in global business at The Paul Merage School of Business.

While studying marketing at Tecnológico de Monterrey, San Vicente interned at CEMEX, the world’s second largest building materials company. There he caught the attention of the CEO and landed a full-time job, when he posted a blog discussing how social platforms help innovative ideas percolate up from all levels of the organization. San Vicente went on to launch the digital transformation global practice at a CEMEX subsidiary Neoris, and even flexed his entrepreneurial muscles as a restauranteur. All in his twenties.

But to become the transformational digital leader he envisioned himself as, he wanted to get to California and business school.

The Merage School’s emphasis on digital transformation and strong support for entrepreneurs attracted San Vicente, and Irvine’s close-knit community reminded him of his hometown. When he attended Admits Weekend, he knew he’d made the right choice.

“A-players want to play with A-players, and once I was engaging with people at UCI, it was just a different vibe,” he says. “They’re all driven, strategic thinkers, and they all want to achieve. It was just a great environment.”

San Vicente took every opportunity to collaborate with those A-players at the Merage School and distinguished himself in the process. He won best COO in the Technology and Entrepreneurship Negotiation Competition, which brings together students from business, law, engineering and science for a day-long negotiation session for the use of a patent.

He also contributed to the Merage School team that took first place at the Notre Dame Blockchain Technology Innovation Challenge.

“Arturo embraced one of the hottest topics within the digital environment, namely blockchain technology. The team addressed some of the most advanced applications of blockchain technology within an even more advanced complex ecosystem,” says Hernandez, who advised the team. “This is what the Merage School is all about, the integration of theory and practice within a complex system which renders exceptional results.”

Yet San Vicente says the highlights of his Merage School experience were unexpected, what he calls the “side effects of the MBA.” For example, through his participation in The Executive Committee (TEC) on Campus program, he was coached by Gary Brinderson, and was exposed to leadership perspectives from executives featured in Harvard Business Review cases, elected officials and others. In another surprise, he was on a team that pitched to billionaire businessman Patrick Soon-Shiong, after winning first place at the Fast Forward Entrepreneur Competition for a startup concept utilizing one of Soon-Shiong’s patents.

Despite his success at the Merage School, San Vicente says he had moments of self-doubt, especially when it came to funding his degree. Advisors in the Career Center and the admissions office provided encouragement and motivation – including scholarships and connections to work opportunities within the school – to keep him going, even when he was nearly ready to give up.

Throughout his job search, staff at the Merage School’s Career Center also coached San Vicente. When it came time for his eagerly anticipated Microsoft interview, he wasn’t even nervous.

“I knew that I was ready. The Merage School did a lot of things for me, and I’ve been preparing for this my whole life,” he says. “Microsoft’s values — collaboration, growth mindset, overcoming challenges — are part of the Merage School’s culture, too.”

San Vicente nabbed a promotion at Microsoft after one year, not only because of his job performance, but because he had written a forward-thinking competitive analysis of his product space.

“The frameworks we had on strategy and competitive intelligence don’t apply anymore. Some guy or girl hidden away in a bunk can come up with a solution that will disrupt your business, and that change the dynamics,” says San Vicente. “You have to be ready for that.”

At the same time, he urges caution about the digital revolution. “Not everything is going to be a disrupter,” he says. “First of all, you have to understand the technology, does it apply to my business, if it does, how can I turn it into a competitive advantage for me?”

As San Vicente continues leading the global growth strategy for his line of business, he also looks forward to inspiring the next generation.

“At the end of the day, it’s getting to the platform to make an impact,” he says. “Coming from the town that I came from, there were times when I thought there was no hope. Hopefully if I can do it, that inspires someone else.”