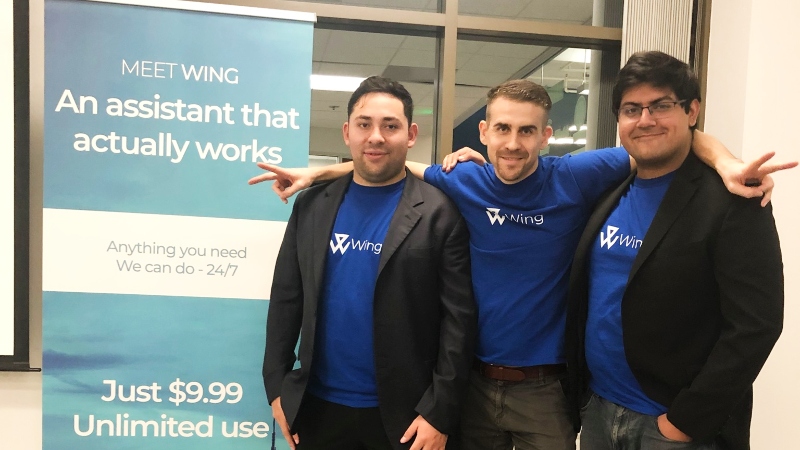 Polzin is chief marketing officer and co-founder of Wing—a new app trying to become your very own personal assistant—at a price you can actually afford.

The story of Wing’s early beginnings reads like a classic start-up fairy tale. UCI undergrads Karan Kanwar and Martin Gomez, now CEO and COO of Wing respectively, were facing a problem familiar to many college students. Their families had decided to come by for a surprise visit. But they had class—how could they clean their dorm in an easy and cost-effective way?

“This started as an app for college students,” said Gomez at the launch party. “Now, after one and a half years of development and hundreds of thousands of hours of coding, Wing is so much more—Wing is for everyone.”

Wing can help users perform simple to moderately complex tasks—everything from rescheduling appointments to booking entire trips (including flights, hotels, and activities). The app, powered by a mixture of artificial and human intelligence, can write your resignation letter or give you a book or podcast recommendation catered to your personal tastes.

“At the moment, Wing is about 15-20% AI, and it’s getting smarter,” explained Polzin. “Each month we see at 4% improvement in Wing’s ability to perform tasks autonomously.”

When the app made its debut on Product Hunt, it won the global #1 Product of the Day Award, gained 120 new users in just one day and raised over $100,000 in pre-seed funding.

“It makes sense that we’re all working on this together,” said Sharma. “Each one of my classmates was hand-picked by the Merage School and they all possess a strong business acumen. This is invaluable when it comes to brainstorming on a strategic level and making decisions that will impact Wing for a very long time.”

Polzin credits the School for nurturing his entrepreneurial spirit.

He said: “Our digital marketing and strategy classes gave me tools that I use on a daily basis as an entrepreneur. The opportunity to choose my elective classes and specialize in Digital Transformation and Entrepreneurship gave me a tailor-made skillset.”

Wing is also committed to giving back and leading through the current COVID-19 pandemic, offering the service for free to interested hospitals.

“We want to help healthcare workers on the front lines of this crisis,” explained Polzin. “Our app takes care of their daily chores so they can focus on saving the rest of us.”