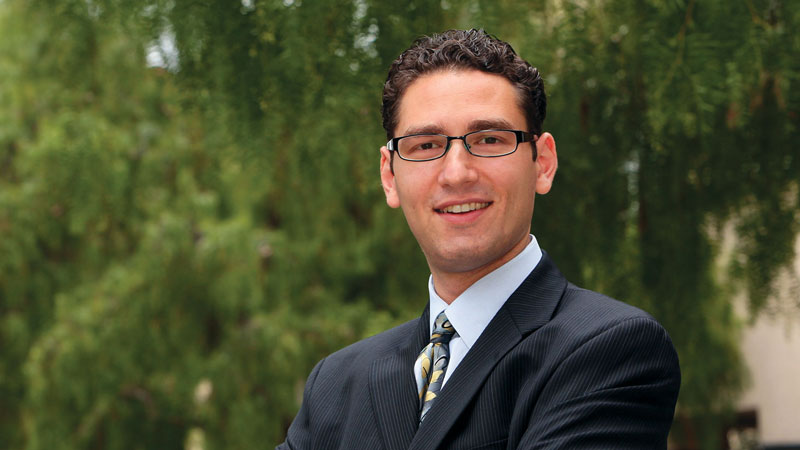 Not All Ad Exposures are Equal: A New Approach to Optimizing the Spread of Online Advertising

About a third of all online advertising is impression-based, with the principal objective of drawing eyeballs to build brand or product awareness. Unlike conventional advertising, online ad campaigns can be targeted to highly customized population segments. The spread of an ad’s impressions across target audiences is a key metric of an ad’s performance. Gini indices and Lorenz curves offer a novel approach that may help publishers and ad purchasers better evaluate their respective strategies for analyzing past performance and optimizing the distribution of future ad campaigns.

Associate Professor of Operations and Decision Technologies John Turner of UCI’s Paul Merage School of Business, and Miguel Lejeune, professor of decision sciences at George Washington University, explored the potential benefits of applying Gini indices and Lorenz curves to the analysis of how online advertising is spread across target audience segments. Their work is reported in the study, “Planning Online Advertising Using Gini Indices,” published in 2019 by Operations Research.

Inequality is a complex problem in the advertising world

Studies of wealth inequality typically use a Lorenz curve to illustrate the spread of wealth across a population. Turner and Lejeune suggest using Gini indices and Lorenz curves to measure the spread of an online ad’s impressions as they can provide a useful analytical tool for understanding the ad’s effectiveness and a means of fine-tuning pricing to fit the advertiser’s specific needs.

Figure 1 illustrates the idea with two hypothetical Lorenz curves, in blue and red. A perfect spread of impressions, represented by the dotted line, is rarely achieved in reality. The blue line might reflect a successful matching of the desired spread and the delivered impressions. In contrast, the red curve indicates a missed target, with too few impressions—only 20%—delivered to nearly 60% of the target audience. 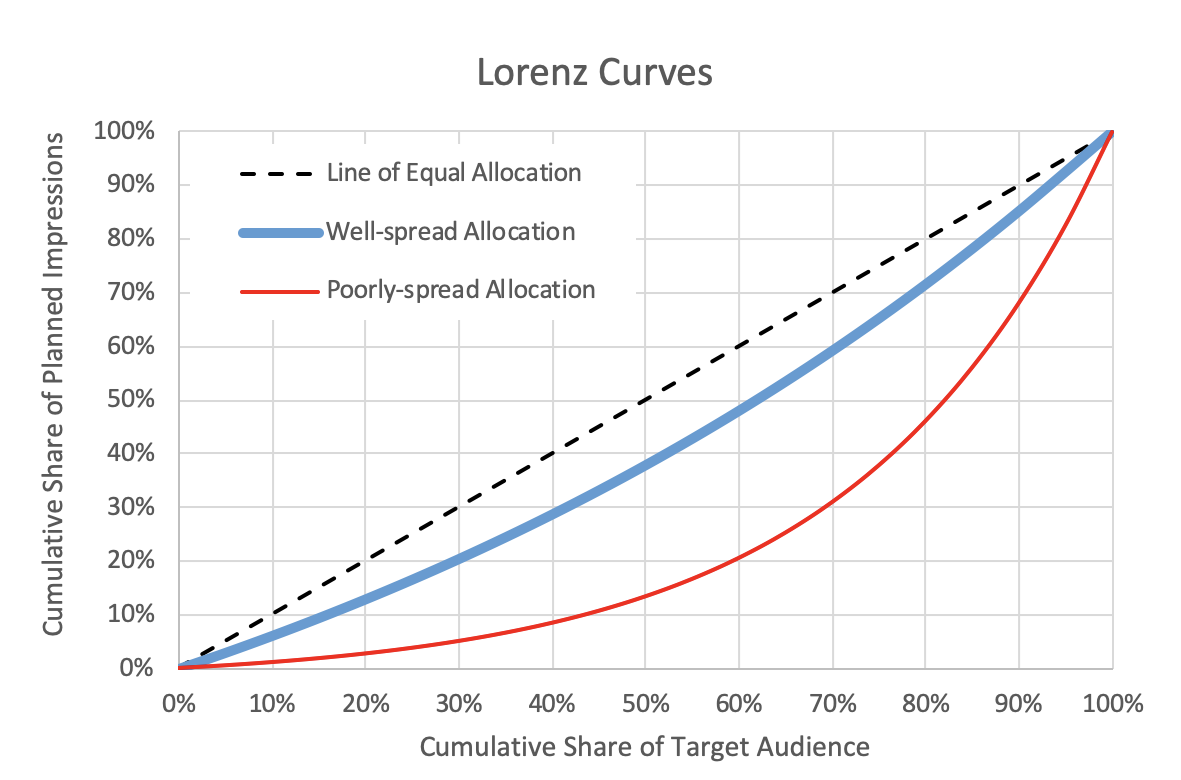 A Gini index is equal to twice the area between the dotted line of equal proportion and the Lorenz curve. The result is a value between 0 (perfect equality) and 1 (drastic inequality), when all the ads are shown to a single user. A result like the blue line will produce a Gini index much closer to zero than the red line. By calculating the Gini index, advertisers and publishers can see in one value how well-spread an ad campaign’s impressions were.

In online advertising, the variables stack up

Bringing Lorenz curves and Gini indices into the online advertising world involves grappling with a complex set of variables. Advertising sold by a publisher to an advertiser on a guaranteed impressions basis typically involves a contractual obligation to show the ad a certain number of times within a fixed time period. The advertiser’s target audience, such as women who live in California, restricts the set of users the publisher can use to fulfill the contract. If a campaign targeting women in California concentrated too heavily on women in Los Angeles and did not get many impressions from elsewhere in the state, it may not have the spread the advertiser wanted.

Because only one ad can be served to a user at a time, the publisher must continually choose winners from among its many advertising customers. Some customers pay extra to target narrow subgroups. Consequently, the publisher has an incentive to carve out these users and not serve other ads to them.

Publishers are aware of the distribution inequality problem. Many ad publishers use a mathematical model to determine how impressions are allocated across multiple advertising campaigns. Existing models produce well-spread advertising plans using a quadratic penalty function, which can have costly results for publishers due to its rigid interpretation of inequality and limited flexibility to accommodate competing requirements. This approach can frustrate efforts to interpret and compare the inequality of how impressions are spread across ad campaigns and across different dimensions such as time, geography, and demographic.

Turner and Lejeune propose replacing the baseline model’s quadratic penalty function with one based on a Gini coefficient. As Turner explains, “A publisher can benefit from this approach by showing customers exactly how the publisher’s discretion can be used to benefit the advertiser.” The approach gives advertisers insight into the opportunities they were not given, allowing them to evaluate whether to pay more for those opportunities.

Turner and Lejeune also develop an algorithm which can be used to quickly compute an optimal solution for their Gini-based ad planning model. “These kinds of models can be hard to solve given all the variables,” Professor Turner explains. “A typical publisher manages thousands of ad campaigns, and these all need to be taken into account simultaneously.”

Online advertising has undergone significant revenue growth over the last decade. With deepening competition, Turner believes that a pricing model based on Gini indices may offer publishers a novel method for offering precisely tailored impression-based advertising with pricing and penalties fine-tuned to specific performance demands. Although bias in favor of higher paying customers will continue, publishers can offer a concrete illustration of how an ad will be distributed across an audience and charge accordingly.

John Turner is an associate professor of operations and decision technologies at The Paul Merage School of Business. His research is focused on fostering a richer understanding of the planning, pricing, and scheduling of online advertising. His work includes exploration of new advertising models, applied optimization, and the intersections between operations and marketing. Turner holds a PhD in operations research from the Tepper School of Business, Carnegie Mellon University.