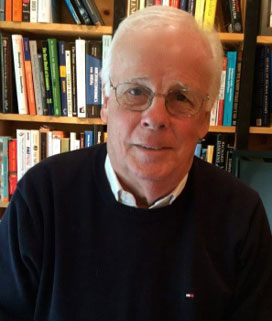 Monopoly in economic theory and law

Monopoly in economic theory and law

Richard McKenzie is the Walter B. Gerken Professor of Enterprise and Society Emeritus in the Paul Merage School of Business at the University of California, Irvine. He retired from UC Irvine in 2011 after a forty-five year academic career, but only to pursue an array of academic and non-academic (business and service) ventures, not the least of which is the development of his online video lecture course, involving fifty-eight thirty-minute lectures, on Microeconomics for Managers: The Economic Way of Thinking for Students of Business (Cambridge 2016).

He is married to Karen Albers McKenzie.

Professor McKenzie has written more than thirty-five books and monographs in economics.

His New World of Economics, co-authored with the late Gordon Tullock was first released in the mid-1970s and went through five editions and five foreign languages through the early 2000s. It has been adopted, at one time or another, in almost all of the country's major colleges and universities. A substantially revised and updated 6th edition of The New World of Economics: A Remake of a Classic for New Generations of Economics Students (Springer), was released in 2012.

Professor McKenzie's research ranges over a number of topic areas but concentrates on economic policy issues and methodology. He is currently working on an academic book A Reconstruction of the Foundations of Economic Science, which seeks to make the human brain the critically scarce resource in the conduct of economics and seeks to unify conventional economic analytical methods with the findings of behavioral economists and . His most recent policy paper is on “Should Tipping Be Abolished?”

Over his UC Irvine career, he regularly received teaching and service awards from his MBA students at the Paul Merage Business School. He has also received teaching awards from practically every other university where he has taught. Professor McKenzie moved to Irvine in 1991. His main teaching duties involved the microeconomic course for Fully Employed and Executive MBA students.

He received his B.S. from Pfeiffer College in North Carolina (1964), his M.A. from the University of Maryland (1967), and his Ph.D. from Virginia Tech (1972). He was awarded an honorary doctor of letters degree from his alma mater in 2001. He is a past president of the Southern Economic Association.

Professor McKenzie grew up at Barium Springs Home for Children (near Charlotte, North Carolina), an experience that led him to write The Home: A Memoir of Growing Up in an Orphanage, 2nd edition (Dickens Press, 2006). His own orphanage experienced caused him to edit Rethinking Orphanages for the 21st Century (Sage, 1998) and Home Away from Home: The Forgotten History of Orphanages (Encounter, 2009). He is executive producer of a  documentary film on Homecoming: The Forgotten World of America’s Orphanages (which can be viewed by clicking on the link. The film was screened at several film festivals around the country and received the Best Documentary Award in the Sedona (AZ) International Film Festival in early 2005. The film was aired in 2006-2008 on over 220 PBS stations, including stations in practically all major television markets. Most of his work on his orphanage avocation has been focused on orphanages as they existed before the mid-1960s.

In 2013, Professor McKenzie released his latest book on a self-proclaimed "modern-day orphanage" (The Crossnore School), Miracle Mountain: A Hidden Sanctuary for Children, Horses, and Birds Off a Road Less Traveled (Dickens Press). This book conveys the difficulties and triumphs of today’s children in distress as seen through their eyes. He also organized the production of a documentary short on The Crossnore School, which can be viewed here. He recently published "Orphanage Alumni Believe in the American Dream".