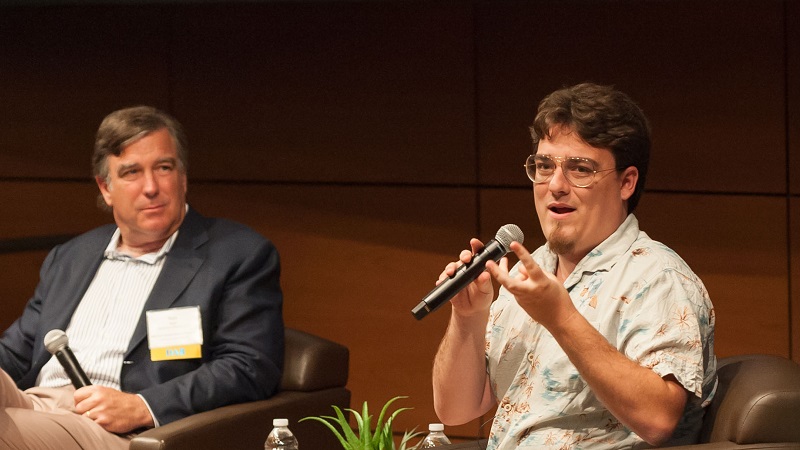 Palmer Luckey, right, the founder of Oculus VR and Anduril Industries, was interviewed by Ken Beall, left, the advisory board chair at the Beall Center for Innovation and Entrepreneurship, at the UCI Paul Merage School of Business' Distinguished Speaker Series in May. • Chris Lee/UCI

In the past 30 years, there have been just two unicorns – companies that reach a billion dollar market valuation – in the defense industry: SpaceX and Palantir Technologies.

The two companies, different as they are, share one major trait in common. They both were founded by billionaires.

Palmer Luckey, a self-made millionaire who spoke at the UCI Paul Merage School of Business’ Distinguished Speaker Series in May, intends to guide his new venture, Anduril Industries, into becoming the third unicorn.

Anduril, based in Orange County, is currently creating devices that leverage radar and sensory technology to detect everything – humans, vehicles, animals, plants – within a two-mile bubble, Luckey told the audience at the community and networking event. Anduril’s system is similar to Israel’s Iron Dome defense system, only smaller.

During the event, which was sponsored by the Beall Center for Innovation and Entrepreneurship, Luckey also shared stories of Anduril Technologies’ success, as it seeks to expand its projects in the security sector. In fact, the company has deployed technology at several Marine Corps bases, and it plans to do work on the southern border.

Luckey added that Anduril decided to build its technology before asking the government for support, rather than creating technology at the government’s request. “So I’m taking on enormous risk,” Luckey said. “But that’s how you short-circuit the system.”

Luckey, who made his millions in 2014, when Facebook purchased his virtual reality company, Oculus VR, said that he’s considered how new technology could make an impact in the defense sector for a long time.

Before Oculus VR, when he worked at a research and development lab, Luckey developed software to aid soldiers returning from war. The virtual reality exposure therapy re-created unpleasant environments, and allowed participants to mitigate their threat response and come to terms with traumatic experiences in a private environment.

Soon after, Luckey focused his efforts on Oculus VR, but the peculiarities of the defense space never left his mind. He figured that large, global technology companies such as Apple and Google had no interest in fulfilling defense contracts. And he thought that companies that specialized in the sector no longer had the best and brightest minds on their teams.

So, he chose to enter the void.